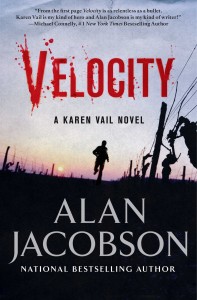 “Velocity is a rare and exquisite vintage of the genre, a thriller with heart and soul to go with its proverbial muscle. This is The Silence of the Lambs gone conspiratorial. Think Hannibal Lecter connected to some dastardly, Washington-spawned plot. Now that Thomas Harris’ rare writing has dissolved into drivel, Jacobson seems more than ready to replace him as king of the serial killer form.”
–Providence Sunday Journal

“Velocity plunges readers into a nail-biting, heart-pounding chase through the dark world of serial killers, drug cartels, and DEA busts and exposes an edgier, more vulnerable Vail. Jacobson’s best to date; essential for anyone who craves nonstop action, danger, and a gutsy heroine.”
–Library Journal

“It is understandable that two of the author’s books are under development as major feature films. Velocity, with its suspenseful, dizzying pace, and myriad surprises under each grapevine in Napa Valley, might just make it to the big screen as well. Jacobson writes for suspense junkies and gets the monkey off their backs; he’s that good.”
–New York Journal of Books

“Being an Alan Jacobson virgin, I didn’t know what to expect from his novel Velocity. However, after reading the first sentence, I knew this book would intrigue and entertain me like nothing else. I wasn’t wrong. This book was a fantastic read! There were many moments where Jacobson took me on a ride I thought I was prepared for. He kept me guessing at every turn and made me need to know the truth. What a magnificent book! Read it!”
–Suspense Magazine

“Alan Jacobson does a remarkable job…this exhilarating Karen Vail police procedural…is action-packed… yet the story line shows another side of the heroine; she has a heart. The intense profound look at drug trafficking enhances a powerful California thriller as Mr. Jacobson scores big time with this super detective tale.”
–Mystery Gazette

“Velocity is a 5-star novel and the must-read of the year…I can’t imagine what Jacobson can write next that would top it. Then again, I felt that way about Crush—and he gave us Velocity, so he’s clearly up to the challenge… Velocity is a ride that accelerates as it hurtles forward. The only bad thing about this novel is that it ends.”
-GoodReads.com

“Velocity was a pulse-pounding ride that did not stop from beginning to end. The novel was full of twists and turns, shocking secrets and truths, government operations, suspense, and thrills… this was a fun, interesting read, with a depth to it that was surprising. I am looking forward to reading more about Karen Vail and her colleagues in the future.
-Bestseller’s World

“From the first page, Velocity is as relentless as a bullet. Karen Vail is my kind of hero and Alan Jacobson is my kind of writer!”
–Michael Connelly, New York Times Bestselling Author

“Jacobson captures the complexity of the mission faced by DEA, the threat posed to our country, and the constant danger our agents face battling members of international drug trafficking organizations. As someone who devoted his career to carrying out that mission, I can say first-hand that Velocity hits the target. Jacobson’s acquired a new fan.”
-Supervisory Special Agent Michael Upchurch, Drug Enforcement Administration (ret)

“The American Heritage® Science Dictionary defines ‘velocity’ as ‘The speed and direction of motion of a moving body.’ FBI Profiler Karen Vail is that moving body and she is running to beat the clock with a fiery momentum to find her missing boyfriend. I loved this book! Jacobson keeps getting better and better…. surprising and unexpected reveals create a story that is much more than one at first assumes they are reading. I’m very much looking forward to the next book, which one can only hope is in the works.”
-Back to Books blog

“Jacobson once again delivers an exciting story that’s fueled with suspense. Unlike other novels that have federal law enforcement officers as their lead characters, Velocity doesn’t come across as a ‘know-it-all,’ condescending work of fiction. Instead, Jacobson delivers a page-turner that hosts intriguing characters, entertaining dialogue, and a plot that moves with the ferocity of a charging bull. Special Agent Vail forges ahead as an “against the odds” dedicated investigator, and the reader will enjoy rooting for her. From the law enforcement perspective, I think you’ll find Special Agent Vail as someone you would ‘go through a door with.'”
–The 1811, Federal Law Enforcement Officers Association Journal, President Jon Adler