Nineteen years ago today, my brother called me in the early morning hours on the west coast and told me to turn the on the TV. He said a plane had flown into one of the twin towers. Having grown up in the city, and worked from time to time in the towers with my father, I was stuck in a hazy sleep-induced fog: a plane? Like a small plane? 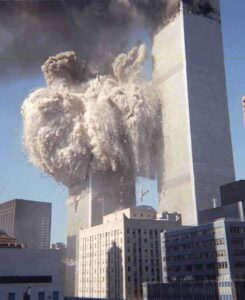 The TV screen came on and NBC news showed smoke emanating from the side of one of the towers. I was in denial, still thinking it was an accident. It wasn’t foggy out; how could a pilot not see the tower? Did he have a heart attack or stroke? Was it a suicide? While watching, a second plane hit. I couldn’t believe what I was seeing. I knew then it was no accident.

As the nightmare continued with the passing hours—the image of the first (south) tower falling will always be with me—evidence began emerging that we were under attack. I sat numbly in my office. I had a phone call scheduled with Kim Rossmo, the father of geographic profiling, relative to The 7th Victim (FBI profiler Karen Vail #1), which I was in the process of writing.

I called him as scheduled and asked if he still wanted to talk. We both agreed that we weren’t getting anything else done, so we forged ahead. That information proved important to the plot of The 7th Victim—and remains interwoven, in my mind, with the events of 9/11. I examined the events of 9/11, this time in a novel, in Spectrum (Karen Vail #6). Honestly, I didn’t want to “go there,” but the storyline involved rewinding to Vail’s first day on the job as an NYPD beat cop and moving forward through time to the present, following her career…as she pursues a serial killer who had been operating with impunity in NYC. But I couldn’t skip over September 2001 as if it never happened. Vail was a law enforcement officer in the city at the time. Although my editor urged me not to go there, I felt I had to. I told him I’d write it and if it didn’t work, if it didn’t add value to the story or character, we’d strike it.

I spent several weeks working on those chapters, researching and reliving 9/11 in memories and video and government reports and firsthand accounts. I had to get it right. In the end, my editor read the manuscript and told me not to change anything in those pages. I nailed it and gave it life and meaning—to both the tragedy and to Karen Vail, who—like so many law enforcement officers—was at ground zero alongside the firefighters and EMTs. She came away deeply affected.

But as I think back on 9/11, I am reminded about how society’s attitudes toward police

have changed. They were heroes back in September 2001, running back into burning, smoke-ridden, collapsing skyscrapers to rescue trapped citizens. Yes, they were heroes. True heroes, not fictional Marvel superheroes. People like you and me—except they sacrificed their lives and health to save others.

Nowadays, because of graphic and unforgettable

images that have made us all sick, the police are often viewed as the enemy. What has changed? I’d say not a whole lot. Perspective, perhaps. And the technology to document with our pocket video cameras the horrific behavior some cops have exhibited. I’ve been appalled at what I’ve seen—and as you may know, I’m an ardent supporter of law enforcement. 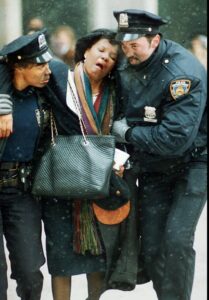 Are the police heroes or villains? It’s not a black and white issue. (Or perhaps it is.) There’s no question that changes need to be made…better training, better hiring and filtering processes to find bias or potential bias in police academy candidates. And better oversight so that those who are wont to do bad things are held accountable the first time—and despite “heroic” efforts by the police union—the bad behavior is not swept under the rug only to occur again. Because when bias exists, it will happen again. And sometimes, as we’ve seen, the result is irreversible.

We need a reasonable, measured approach to police reform (as noted in my previous blog post). The vast majority of law enforcement officers do their jobs properly. Many are heroes, community builders and protectors of law and order. Hundreds of thousands of “contacts” between cops and suspects occur each year without incident. Let’s maintain some perspective while cleaning up the system to attempt to reduce such incidents to zero. As we reflect on 9/11, let’s remember what we thought of cops nineteen years ago as both “sides” work together to restore that image.