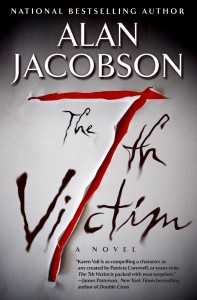 “Karen Vail is as compelling a character as any created by Patricia Cornwell, or yours truly. The 7th Victim is packed with neat surprises.”
—James Patterson, New York Times bestselling author

“There are thrillers which you read once then throw away. Alan Jacobson has written a book that is fast paced and intense and will make sure you’ll read it over and over again. A masterful work–dark, creepy, and at the same time you won’t be able to put it down.”
—The Strand Magazine

“The 7th Victim…makes Silence of the Lambs look like a young adult book. Lock your doors, bolt the windows and make a pot of coffee; you’ll be up all night, even after you finish reading. This is an incredible book.”
—Crime Spree Magazine

“Alan Jacobson is a hell of a writer, and his lead character, Karen Vail, is a hell of a lady: tough, smart, funny, and very believable. The 7th Victim is an impressively researched novel about serial murder packed into a tightly twisting plot. Very scary, and very good. This reads like a Nelson DeMille book. And I should know.”
—Nelson DeMille, New York Times bestselling author

“I’ve always been a fan of Alan Jacobson’s thrillers, but his latest novel, The 7th Victim, is a quantum leap in terror and suspense. Tautly written and brilliantly executed, here is a masterpiece of horror and murder. Read it with the doors locked and the lights blazing.”
—James Rollins, New York Times bestselling author of The Judas Strain

“In the fictional world of criminal profilers, Karen Vail is a knockout, tough and brilliant. In The 7th Victim she truly meets her match, and the twists and turns will astonish you.”
—Tess Gerritsen, New York Times bestselling author, creator of “Rizzoli & Isles” TV series

“As one of the founding fathers of the FBI profiling unit, I can unequivocally state that The 7th Victim sets a new standard for serial killer novels. Like Silence of the Lambs did 20 years ago, The 7th Victim redefines the genre and brings it into the 21st century. With meticulous research and dead-on accuracy, Alan Jacobson has not only written a gripping, twisting thriller, he’s created a must-read book.”
—Robert Ressler, world renowned FBI Profiler (ret.), founder of VICAP (FBI Violent Criminal Apprehension Program), recognized “father” of serial killer research, international lecturer and bestselling author

“Surprising revelations provide a shocking finale. The author’s seven years of study with the FBI’s profiling unit have helped him craft a riveting, authentically detailed thriller that will ensnare readers. Strongly recommended for all popular fiction collections.”
—Library Journal

“The 7th Victim is an entertaining, fast-paced read in the style of Patricia Cornwell’s Scarpetta series, but adding a further grittiness and realism with the killings and the harsh everyday fights Vail must go through as an FBI profiler and mother. It is hopefully the first of more to come in the world of Karen Vail.”
—Alex C. Telander, Borders Sales Manager

“This meticulously researched presentation of a profiling agent is realistic. The writing is smooth, and the mystery, presented from both the agent’s and the killer’s viewpoint, is thrilling.”
—Romantic Times

“Move over Silence of The Lambs! [The 7th Victim] is a fascinating book. It’s taken the genre to a different level.”
—KATU ABC-TV, AM Northwest, Helen Raptis & Dave Anderson

“One of the best stand-alones in this genre that I’ve read in quite some time. If you enjoy psychological suspense thrillers I can’t recommend this book more highly. I dare any reader to figure out ‘whodunit’ before the final reveal.”
—Back-to-books blog

“Jacobson spent years of study with the FBI’s profiling unit, and the research shows.”
—Sacramento Bee

“Fast moving with edge of your seat suspense. Jacobson has …breathed life into his characters, making them complex and believable….a well-planned thriller with all of the suspense and mystery to back it up.”
—Reader to Reader, Vickie Denney

“I ABSOLUTELY LOVED Alan Jacobson’s The 7th Victim. Like The Silence of the Lambs, it raises the bar on the entire thriller genre. It’s been quite a while since I’ve been struck this strongly by a new thriller. Karen Vail is an amazing character, and I was totally swept up in her story. That character alone would have been enough to impress me, but add in the delicious plot twists and the obvious painstaking research which were integrated seamlessly into the novel, and the result just floored me! I intend on hand-selling The 7th Victim like crazy.”
—Jeff Broyles, Manager, Bay Book Company