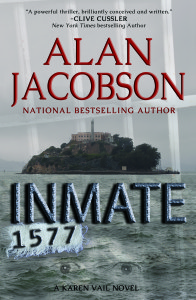 “Inmate 1577 is a mystery masterpiece. The author has written his best work to date, creating a classic psychopathic character that will be the inspiration for thriller writers in the years ahead.”
– New York Journal of Books

“Jacobson’s latest Vail novel continues his streak of terrific mind-bending thrillers. The story line seems straightforward at first, but when the twists come, even the most hard-core thriller fans will not figure everything out. Jacobson should be mandatory reading for the James Patterson crowd; this is an essential addition to any fiction collection.”
– Library Journal
“Alan Jacobson has already distinguished himself in the crowded serial killer sub-genre of thrillers. But his smooth and seasoned approach reaches new heights in Inmate 1577, a stunner of a tale that is structurally flawless. Inmate 1577 moves deliberately along a circuitous path lined with secrets, surprises and subterfuge…Jacobson builds the suspense to a pulsating crescendo that will ultimately bring the walls down upon Vail, not quite literally but in immensely satisfying fashion.”
– Author Magazine
“If you like puzzles and conundrums and the slowly unraveling of clues, you will enjoy Inmate 1577. All the pieces are there for the reader to put together, but watch out…there might be a surprise or two. This is an excellent novel…a very worthwhile read.”
– Suspense Magazine
“Inmate 1577 is another rippin’ good ‘Alan Jacobson read’! Jacobson researches his books like a good newspaper reporter, and then pushes the envelope into reality more thoroughly than the typical crime novel could ever allow.”
– The San Francisco Chronicle
“A powerful thriller, brilliantly conceived and written.”
– Clive Cussler, New York Times bestselling author
“Alan Jacobson has captured the desolate solitude that distinguished Alcatraz as the toughest US Penitentiary which housed the worst of the worst. Inmate 1577 is not only a riveting read with a Hitchcock-type ending I never saw coming, but it possesses an authenticity that brought back memories from my many years on The Rock.”
– George DeVincenzi, Alcatraz Correctional Officer (1950-1957)

“In my 27 years of working at USP Leavenworth as a Correctional Officer and Institution Historian, no other book has painted the story of what it’s like to survive behind those 40 foot walls better than Inmate 1577. Hats off to Alan Jacobson for his relentless research and desire to bring credibility to an already fascinating story!”
– Kenneth LaMaster, Leavenworth Correctional Officer (ret), Institution Historian, and author
“Inmate 1577 is everything you’d come to expect from an Alan Jacobson novel, a page-turning thriller that will keep you on the edge of your seat for hours…his previous books were gripping thrill rides, but with Inmate 1577 Jacobson has taken it to another level.”
– Andrew Gulli, Managing Editor, The Strand Magazine