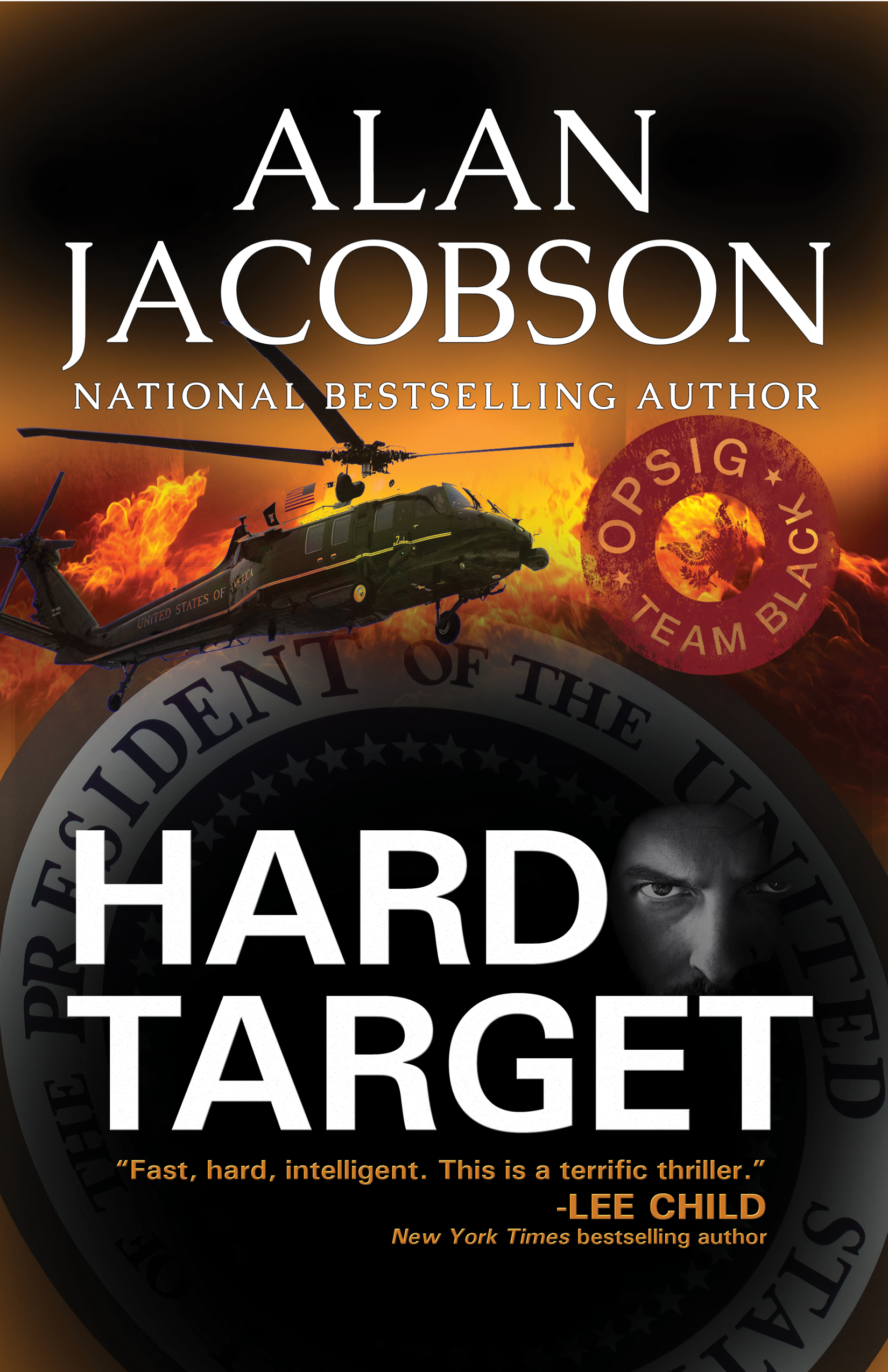 “Jacobson’s high-concept plot speeds with race-against-the-clock pacing from the opening chapter to the hair-raising twist at the end. Hard Target is a smart, complex novel that explodes from the pages and scores a direct hit on my radar.”
—Vince Flynn, New York Times Bestselling Author

“A top-notch, brilliantly crafted thriller by one of the best. On a deeper level, it’s a story of lost love, of a man’s search for meaning, of yearning and deception. With a wealth of accurate details and a disturbingly realistic plot, this is a novel guaranteed to thrill.”
—David Morrell, New York Times Bestselling Author

“A grand slam… Filled with action from beginning to end, Hard Target is Alan Jacobson’s best work to date, and he has written several bestsellers…. his intimate knowledge of how the FBI works makes this novel especially authentic. Mr. Jacobson’s research and networking has enabled him to create characters that could be mistaken for actual FBI agents… The author, aware of the tremendous popularity of his character FBI Special Agent Profiler Karen Vail, drops her into the mix to play a pivotal role in deciphering matters affecting national security… I won’t comment about the ending except to say: Wow!… Hard Target is a just-shot-bullet-fast-moving thriller mirroring present-day concerns affecting our nation and her allies… While the story is fictional, it’s definitely not farfetched. If you’ve ever wondered about our government’s vulnerabilities, read Hard Target—it’s like shining a spotlight into a dark, dank, mysterious basement: You might be surprised at what you find hiding there.”
—New York Journal of Books (Read the entire review here.)

“Authenticity makes this novel work. Jacobson delves deep into the inner workings of government agencies like the CIA and the FBI to create a realistic fly-on-the-wall scenario. “Hard Target” reads like a real case with real people, and readers will be blown away when it’s over. [It is] Alan Jacobson’s latest page turner.”
—The Associated Press (Read the entire review here.)

“A wild ride from start to finish. While not exactly part of his bestselling Karen Vail series, it most certainly takes place in Vail’s world, and indeed she has a featured role in the book. But despite the familiarity of some of the characters, HARD TARGET is not quite like anything you have read before. /Jacobson’s novels are known for the incredible amount of research that he pours into them, and HARD TARGET is no exception. Jacobson gives an in-the-room, over-the-shoulder viewpoint to each and every scene and detail that occurs in the book, which in turn quietly ratchets up the adrenalin level sentence by sentence, page by page. If you want thorough, Jacobson is your man. He lists around 26 different real-world sources for the derring-do and goings-on that occur here. Yet, the narrative never feels burdened or over-laden with details. Instead, the facts and minutiae that propel the novel make it even more suspenseful and interesting. It is one of those books that readers actually feel smarter for having read but without sacrificing entertainment value. /HARD TARGET is one thriller that you absolutely should not miss, a work that is as current and frightening as tomorrow morning’s headlines.”
—Bookreporter (Read the entire review here)

“This is a non-stop action thriller that puts Jack Bauer to shame…. Readers ‘hop’ into the President’s helicopter with the new President-elect of the United States, and find themselves immediately wrapped up in a terrorist plot that—believe it or not—hasn’t been written before… the plot of this book is first-class and the research that has been done to make sure the novel is ‘right on target’ is extraordinary. This one is guaranteed to KEEP you sitting on the edge of your seat even after you have it in your hands. This captivating ride is a definite keeper!”
—Suspense Magazine

“What sets this stunning novel apart—what makes it sing—is its authenticity and its emotional truth…This is not just a thriller, but a story of coping with loss and coming to terms with one’s past. Hard Target is the rarest of gems in a crowded field of D.C.-based thrillers, and Alan Jacobson has confirmed his place among Vince Flynn, Brad Thor, and political thriller royalty.”
—The Big Thrill Magazine

“Hard Target scores a bull’s-eye, every bit as good as the best of David Baldacci.”
— Providence Journal

Hard Target “reads with the passion and suspense of a two-minute drill. After successfully introducing the character of dynamic FBI profiler Karen Vail in The 7th Victim, and resurrecting her indomitable character in the subsequent hits, Crush, Velocity, and Inmate 1577, Jacobson surges ahead with a new lead character, FBI Supervisory Special Agent Aaron Uziel, a/k/a Uzi. Uziel is immediately confronted with what appears to be a terrorist attack on the president-elect. But was it? The ‘powers-that-be’ want this solved yesterday, and the play clock begins its unrelenting tick for SSA Uziel. Jacobson masterfully pulls in the reader to share the time pressure and investigative challenges that confront SSA Uziel. You’ll turn the pages so quickly, you’ll barely leave a fingerprint on any of them. In addition to its suspense driven plot, Hard Target will entertain the reader with cutting dialogue and character development. Both Uzi and his partner DeSantos lead a cast of intriguing characters, and the dialogue is engaging. Jacobson captures the essence of both the sacrifice and unrelenting commitment of law enforcement officers in his characters. Additionally, he creates a cast of bad guys that are formidable opponents for the good guys. But even more remarkable, Jacobson creates characters that are somewhere in between the good-guy, bad-guy configuration. Hard Target will keep you guessing who’s who, and guide you from front cover to rear cover in a blink.”
— The 1811, Federal Law Enforcement Officers Association, President Jon Adler

“Uzi is one kick-butt hero whose integrity won’t allow him to cut corners or kowtow to the powers that be. DeSantos and Karen Vail are old friends to anyone who has read prior Jacobson novels. Both have decidedly different and very likable personalities. The three of them make a great team to watch in action. There are other characters rounding out the story, some of whom are amazing, some of whom seem pure evil, and some of whom seem one thing but are actually another entirely. / Hard Target really does read like a movie. My advice is to take lots of deep breaths before beginning to read this novel because I had to keep reminding myself to breathe after I started. It grabbed me with the first paragraph… It literally starts with a bang and never lets up. I believe I can honestly say I’ve never read a novel that moves so fast and furiously from page one until the very last word. The twists and turns will give you whiplash and they make a roller coaster look like navel gazing. If you’re an action adventure or thriller or political intrigue or conspiracy novel fan, I highly recommend Hard Target. I loved every heart stopping minute of it!”
— Popcorn Reads (Read the entire review here.)