What’s real and what’s not in Dark Side of the Moon?

Of all the novels I’ve written in well over two decades, this was the most technical and most difficult to get right. I am not a rocket scientist, a planetary scientist, an astronaut, a mission control specialist, engineer, fighter jet pilot, NORAD expert, hacker, laser physicist—you get the idea.

As such, I first had to learn the big picture of what my characters would be attempting and encountering so that I could know what questions to ask—and who to ask them of. This may sound straightforward, but it was not. The knowledge conveyed in Dark Side of the Moon is so specialized that it required input from experts with little overlapping knowledge base. That forced me into a situation where I had to quarterback the offense without knowing how the offensive, or defensive, schemes worked. Before I started writing, I spent seven months in research and outline mode. Those two go usually hand in hand—even more true in this case because I couldn’t know what directions to take my story in if I didn’t understand how things worked, what was possible and what was not. More than once I was told that what I wanted to do was not scientifically feasible. Rather than fall back on the easy, “Hey, it’s just fiction, I can make it up,” I found workarounds to stay as true to the science as possible and achieve ballpark accuracy.

The information regarding SLS and Orion, in broad terms, was correct at the time I wrote the novel. It’s a fluid situation, as NASA and its partners modify and improve on systems and materials as needs develop, test flights proceed, and technology matures.

The malware issue is real and certainly a threat, but as to whether or not it can actually be successfully deployed is uncertain. NASA has a comprehensive testing system, not for malware per se, but for system integrity. Can a nefarious entity circumvent this? Based on what I’ve been told, yes. Perhaps one of the experts I worked with in the writing of my novel will give it due consideration and work with NASA administrators and contractor engineers to implement additional testing. Hopefully, the US military cyber command will take those lessons learned to ensure that a bad actor can’t compromise our space program and the safety of our astronauts in the ways described in Dark Side of the Moon.

As to the flights to and from the Moon, and activities on the lunar surface, it is as accurate as possible; certain things were condensed or omitted to keep the story pacing moving and to prevent me from getting bogged down in minutia—because there is an astounding amount of minutia in a highly technical journey like a Moon shot. It is literally rocket science—and much more. Everything has a measurement and a system or a system check in order to operate. This would make for some mighty dense (in other words, boring) dialogue. I simplified this greatly because I was not writing an operations manual, but an entertaining story.

The lunar module and lunar rover that appear in Dark Side of the Moon were developed by NASA for the SLS/Orion predecessor, the Constellation program. As time passed, however, the agency’s focus shifted to Mars, and plans for 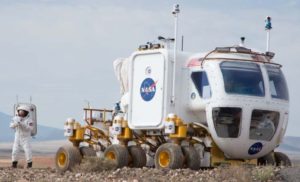 lunar-specific landers were shelved. However, the plans, photos of the prototypes, developmental research, technical specifications, and videos were made available to me and this is what I used in writing the novel. The Spider rover (a descriptive name I made up) is real and prototypes were built and tested in the desert. These photos (like the one at right) and test data proved enormously beneficial to me.

The technology regarding weaponized lasers is accurate. They have been deployed on US naval vessels, with more planned in the coming months. Israel has also been working on a defensive directed energy weapon (called Iron Beam, to augment their Iron Dome system). The US has no plans, however, to create an orbiting laser array around the Moon. My understanding is that it is feasible technologically, but there is no need because caesarium does not exist.

And that brings me to the element at the crux of the story. Numerous radioactive elements, including uranium and thorium, have been found on the Moon. They are also present on Earth, but the concept of a new, as yet undiscovered element on the Moon is feasible given the numerous meteor and micrometeor strikes to its surface. Such meteors come from outside our environment, some from deep space or outside the solar system, and thus could very well contain as-yet undiscovered minerals and elements. When I described what I wanted caesarium to be, former Lockheed/Northrup/NASA JSC geologist Charlie Galindo, Jr., who presided over the real Moon rocks, explained why it should be an element, not a mineral, and how it should be handled.

As previously noted in my opening author’s note to the novel, the Apollo 17 scenes are accurate except for the discovery of caesarium. Some of the dialogue, which I took from the actual mission transcript, was compressed or modified to remove the technical jargon and make it more approachable—and understandable—for the reader. Moreover, the extraordinary nature of caesarium, and Gene Cernan’s and Jack Schmitt’s comments about it, are fictional.

Caesarium presented a challenge from a physics perspective. There are certain things in the physical laws of the universe that had to be stated and addressed, and this made it difficult in the context of the story. I had to take into account what equipment the Apollo 17 astronauts had available to them in 1972 to identify if there was something unusual about the rock sample. The handling of the caesarium by the OPSIG team in the present day presented another set of obstacles: mainly, an element of the kind that I described would be very heavy and it had to be placed in a relatively small container with very thick lead lined walls—which would also be heavy. The physical properties of caesarium that I described in the novel would also expose the crew to radiation, yet it had to be kept in close proximity to them during their three-day journey back to Earth. I did my best to keep it believable, but from a physics perspective, I had to take some literary license—which my editor maintained was fine since, after all, it is fiction that I’m writing.

Cernan and Schmitt did dump equipment out of the Apollo 17 ascent vehicle to lessen its weight for liftoff. Other Apollo missions did this as well. Best I could determine, their food stores were not part of the items dumped (or were inconsequential compared to the expensive equipment that they tossed out the hatch and thus weren’t worth mentioning). As to whether or not packaged food could survive several decades is a matter of debate, as it has not been attempted. However, I tried to make it as feasible as possible by reducing its exposure to direct sunlight, which, on the lunar surface, without an atmosphere, makes a huge difference. I was told that having it underneath metal, blocking the harmful effects of the sun, gave it a fighting chance.

Resurrection of the Apollo 17 lunar rover is theoretically possible, as described in the novel. The information regarding the connection of a solar panel to power it is correct, and was a source of frustration for me because finding an expert who was familiar with the old rover and its existing power requirements was difficult. But the search, and journey, was worth it because I found Drs. Whittaker and Jones. I wholly appreciate the time they took to help me understand how it would need to be done.

Offloading fuel from the Chinese spacecraft is also feasible, according to my rocketry experts, subject to the issues discussed in the novel. That was another thing that presented issues–but Aerojet-Rocketdyne engineer Kent Wong provided the answers and scenarios to make it work.

3-D printing is real and currently being utilized on the International Space Station and by SpaceX (which I saw firsthand on their factory floor). As the technology matures—and it’s doing so every month—it’ll be a commonplace production method used everywhere, including on the Moon and on other planets…when we get there.

As to the plotline regarding China and Russia, my experts felt it was a reasonable scenario and certainly in keeping with what has been observed on the world stage during the past several years. Much of what goes on between these countries relative to the US never comes to light publicly. As is so often the case, truth is stranger than fiction. I will leave it at that.

BetaSomnol, the drug that is injected by Vail and Rusakov in Iceland, bears a fictional name. This goes back to my research for Crush (Karen Vail #2), when I was working with Jonathan Hayes, MD, forensic pathologist in the New York City medical examiner’s office. He was concerned that if we used the real drug name and dosages in the novel, it could give certain people bad ideas—so we renamed the drug BetaSomnol.

As noted, I spent several months working with experts to “get it right.” Does this mean that everything in this novel is factually correct? Probably not–not for lack of effort, but because it’s not feasible given the dozens of specialties involved. I have done my best to keep it ballpark accurate, but I’m sure I have unwittingly mangled some fact or procedure. If you’re one of those experts reading this novel and discover an error, please do not take it personally. I did my best to respect your fields, find the correct subject matter experts, ask the proper questions, get the right answers, and—most importantly—keep the story entertaining. Ultimately, my effort as a novelist succeeds or fails on that singular point.