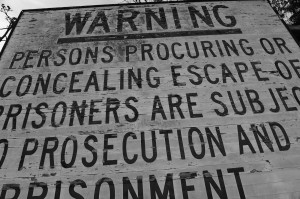 The escape of John and Clarence Anglin and Frank Morris was a real event, and was the most daring, carefully and impressively planned prison escape in the history of the United States. The actual timeline and events were more fantastic than portrayed in Inmate 1577; the breakdown of penitentiary rules and executive discipline was undeniably shocking, and each successive blunder played an increasingly important role in the success of the escape. Ironically, if any one of the lapses had been corrected, the attempt would have been foiled. But these failures—from administrative shortsightedness and odd decisions among the Bureau of Prisons budget misers to the blunders made at the local level, resulted in one of the most fascinating, and nearly mythical, stories in U.S. history.

For dramatic purposes, I chose to include only those events that were relevant to MacNally’s storyline. In addition, some of the real happenings were so unbelievable, it fell under the “truth is stranger than fiction” category; as I’ve often said, just because something really happened doesn’t mean it would seem believable to a reader. There were also times when the source material contradicted other archival information, or was silent on certain facts and details. I thus attempted to get as many perspectives and accounts to determine which appeared the most credible or reasonable.

In preparatory research discussions I had with Carl Caulk, U.S. Marshals Service Deputy Assistant Director of the Judicial Security Division, Carl explained to me that most prison breaks are the result of small, progressive security breaches that combine into a massive failure of procedure that make an escape possible. In reading about past attempts at Leavenworth and Alcatraz, that assessment appears to be spot-on.

In the Alcatraz escape of June 11, 1962, Allen West was a key strategist and originator of much of the plan, but for reasons known only to him, he did not accompany the men when they left their cells the night of the escape. Some theorized he was anxious about going into the Bay waters, and at the eleventh hour was overcome by fear. Other reports indicate he was unable to get out of his cell because of a large chunk of cement around his vent that he was unable to dislodge. This latter theory is supported by the fact that he did eventually leave his cell, approximately three hours after the others—but they had left and taken most of the flotation devices with them. He returned to his cell and later provided many details about the escape and its planning, subsequently supported by forensic evidence and items the escapees left behind, including a second raft and a cement-filled bucket that contained many of the tools they had stolen, built, and used.

Whether the men made it to freedom or not is a matter of spirited debate, and has been for decades. There have been instances of circumstantial evidence that John “J.W.” Anglin did make it—a phone call to a San Francisco attorney the day following the escape asking for assistance in turning himself in to the US Marshals Service; the postcard sent to Clarence Carnes was purportedly real. However, not one of their family members has supposedly seen or been contacted by them in the intervening years. There are stories of someone showing up in dark glasses and head covering at an Anglin family funeral, but it’s difficult to separate fact from fiction.

The U.S. Marshals Service maintains an active file, and I’ve spoken with the marshal who has had the case for many years, Michael Dyke. Marshal Dyke maintains that they keep the file open and continue to investigate any reports of sightings—and will continue to do so until they have evidence of the men’s deaths.

Shortly after the escape, sailors aboard a passing Norwegian freighter saw a floating body in the Bay. They had no radio on board, so it was not until their return weeks later that they reported it. Their description of the clothing worn by the deceased man appeared to match standard Alcatraz inmate apparel.

Further, a waterproof wallet that J.W. had made was found floating off the coast of Angel island, filled with family photos and contact numbers. It was theorized by the FBI that this was too valuable to the brothers for them to ditch it overboard. That, in my opinion, is not proof that they perished. There are other explanations—rough waters could merely have washed the wallet out of the raft. Others have posited that the wallet was a ruse to make the authorities think they had perished, when in reality they had made it to land.

One of their wood oars was found floating in the Bay, as well as two life preservers that they had constructed, with teeth marks around the air hole of one of them, as if it was losing air and had to be reinflated by mouth. This could have been the one belonging to the man whose body was spotted by the freighter.

Personally, I don’t believe there is compelling evidence one way or the other to conclude any of them made it—or did not. Although the FBI and Bureau of Prisons have stated that it would’ve been impossible for them to navigate the raft through choppy and cold waters, their opinion has largely been invalidated by an exercise undertaken by, of all things, a television show: Mythbusters, during which they purchased identical materials to those found left behind by the escapees, and using the same dimensions and tools available, constructed their own raft and flotation devices, then set off at the exact time as the real escapees did, duplicating with minute accuracy the tides and environmental conditions Morris and the Anglins faced. The three Mythbusters men made it to the Marin Headlands without much difficulty. Their show on this is worth watching.

On the literary side, a worthwhile read is Jolene Babyak’s book, Breaking the Rock, in which she takes the reader on an entertaining timeline-based chronicle of the escape. Jolene, the daughter of Associate Warden Dollison, was present on the island the night of the escape. In fact, the warden was on vacation, and her father was in charge that fateful evening.

Jolene researched the escape using original documents available at the National Archives in San Bruno, where much of the Alcatraz documentation is currently stored. It’s a riveting read, and goes into much greater detail than I could; Inmate 1577 is not about the Morris-Anglin escape, though MacNally clearly participates. The real story is rife with shocking details about the failure of penitentiary leadership—which goes all the way from the cell house officers up to decisions made by the Bureau of Prison officials. In retrospect, the involved leadership appeared to be hapless—and definitely clueless—making budgetary cuts and compromising security measures to save money. That is not to take away from the brilliant strategy and work employed by the inmates who participated in this plot. But as Deputy Director Caulk had told me, had any one of the security failures been plugged, the plan would’ve been foiled.

Instead, John and Clarence Anglin, Frank Morris, Allen West, Clarence Carnes and the unwitting administrative staff have given us a story of determination and ingenuity that has become part of United States history. It was fun for me, as an author, to revisit it and bring it to you in the context of historical fiction.

Regarding the MacNally and Shoemacher escape, I took portions of actual Alcatraz escapes and changed them to meet my story needs. But some of the facts—cutting through the window bars with scouring powder-impregnated cord—were real. These inmates were crafty and, as you would imagine, determined individuals. In reading detailed accounts of the escapes and viewing archival photos, I was frequently amazed at what they were able to accomplish. I wrote that kitchen basement scene on site, and traced MacNally and Shoemacher’s steps to the water’s edge. In fact, the bars they cut through are still clearly visible, since the discarded section of bars was merely welded back in place following the escape. 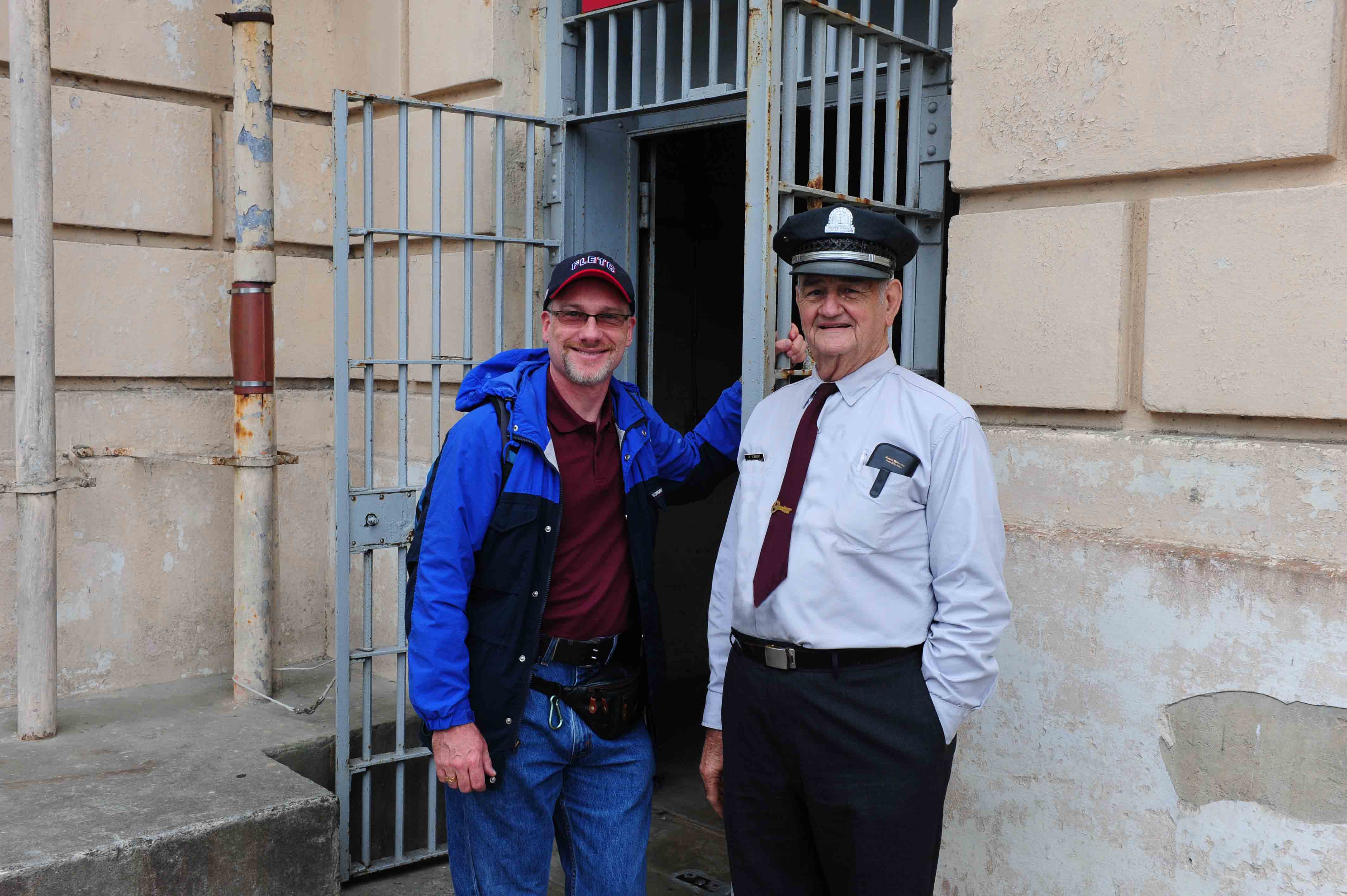 A final note…brutality on The Rock

Obviously, though I do strive for factual accuracy, Inmate 1577 is a fictional story. In speaking with former Alcatraz correctional officers, reading their written accounts and watching interviews with many of them, there are clearly contradictory statements as to whether violence of any sort was perpetrated by a guard on an inmate. There were those who said it absolutely happened, while others denied it. I have chosen to believe those individuals I have spoken personally with, whom I can value in terms of credibility. It seems that although official policy was that inmates are in prison as punishment, but not there to be punished, the application of violence was, at times, necessary to control an inmate who intended to harm an officer.

I believe that in a vast majority of the time, the officers behaved admirably and within the Bureau of Prisons’ rules of conduct. Given the frequency of inmate/officer contact, the often miserable dispositions and questionable morals of the prisoners, many of whom were devoted to a life of crime, some of whom were psychopaths and others merely violent criminals who did not value human life, human nature lends credence to the fact that there were instances where officers lost control and took out revenge against a convict. The percentages suggest an inevitability. That is not to mean I believe it happened regularly, because I do not. But no matter how rare, for purposes of telling a story, I have to focus on those times that are noteworthy, because there is nothing interesting that involves something that does not happen. That’s not just good storytelling; it’s common sense.

Correctional officers have an extremely difficult job to do, and they are asked to work in close quarters amongst killers with no weapons to defend themselves. During the long history of our state and federal prison systems, many have died in the line of duty, and as with all law enforcement officers, we all owe a debt of gratitude for the fine job they do on our behalf.