Black and white, black and blue

I have been digesting the events of the past week with a heavy heart, deep sadness, and tremendous disappointment. Heavy heart for the family of George Floyd. Deep sadness for our country—we are supposed to lead the world in civil rights, in the rule of law, in democratic values, in free speech. Tremendous disappointment—in local law enforcement across the country…in my native New York, in my current California community, in police officers from east to west and everywhere in between.

Those of you who’ve read my novels, read my interviews through the years, and/or the blog posts on my website, know I am a fervent supporter of law enforcement officers of all agencies. We owe a tremendous debt to them—every day. Many of us will never know of the criminal activity they have thwarted on our behalf. The vast majority does the job with honor, respect, and commitment.

In the past, I’ve defended the appalling acts we’ve seen these past few years as the work of bad apples in the police force. I still believe that—but there appear to be way too many bad apples carrying a badge and gun—and with it the power to intimidate and discriminate, to harm and, yes, kill. In talking with some of my law enforcement friends, some believe there’s no problem. Bad apples, that’s it. As one put it, “Each day there are tens of thousands of police interactions with people of color and there are generally no issues.” Others allow that there are areas that could be addressed: Training has been poor in some communities; it has been inconsistent in others. Policing the police is not always independent and unbiased—and it needs to be, for all involved. Past infractions have been filed away and instead need to be taken seriously. A system of ensuring good hires of individuals without bias—racial, religious, gender, or otherwise—and who possess a strong moral code needs to be universal. Violence prevention and intervention efforts need to be funded and implemented. Building community relationships is an important element.

Some cities have done, and are doing, these—or some combination thereof. But all need to do it. I support Congress’s efforts to review—and overhaul, if necessary—our law enforcement modus operandi…provided any emerging mandates are reasonable and well thought out…not a knee jerk reaction, as politicians are wont to do. Should new, reasonable guidelines emerge from Congress, I suspect many municipalities will have no difficulty adhering to them. Others will undergo deep changes in personnel, leadership, and procedures. Some will need sensitivity training to properly address bias in all forms.

A Look in the Mirror

Beyond that, it’d be helpful if each law enforcement officer examines him or herself in the mirror. He should reflect on how he interacts with the public. While we all have bad days—we’re human—being courteous and helpful to citizens will go a long way toward helping turn the tide that has swelled against law enforcement. We’ve read news accounts and seen videos of good deeds done by officers all over the country—but we need more feel-good stores like those to reverse course. It’ll take a while because videos of bad behavior are difficult to erase from the public’s collective memory. Distasteful personal encounters take even longer to overcome. We need the media to highlight, if not lead with, such positive stories.

But consider this—and this goes to society as a whole: it costs nothing to be pleasant, to smile, to assist others who need help, to do a good deed. We all could be more polite and tolerant of one another. Uniforms and badges or T-shirts and jeans, it doesn’t matter. Try to get along and help each other out. Be tolerant, not fearful, of differences.

A Lesson from 1960s Television

On that last point, I’ll close with a pop culture reference on racism. In 1969, the original Star Trek series aired an episode titled “Let That Be Your Last Battlefield.” As Star Trek did to perfection, its writers took political issues of the 1960s, set them in the future on some unknown planet or spaceship—and provided moral perspective. In this episode we have a race of beings who are black on one side of their bodies and white on the other. There’s a stark dividing line down the center of their faces—as seen in the accompanying photo. 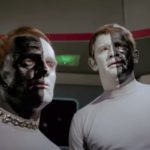 The story begins with a police commissioner pursuing an escaped prisoner who stole a shuttlecraft and fled their planet. The prisoner boards the Starship Enterprise and demands asylum. During their legal wrangling, the commissioner asserts that his prisoner belongs to an inferior race. As he explains the difference, the Enterprise’s captain, Kirk, and his first officer, Spock, confront the absurdity of the man’s claim. Watch the first 45 seconds of the scene: https://youtu.be/vi7QQ5pO7_A?t=133. Did you watch it? The commissioner’s comments are so absurd—and so brilliant on the writers’ part—that they lay bare racism at its most basic level.

We’re all the same. We may have different cultural beliefs, we may pray to different gods (or the same god in different ways), or we may have different skin colors. But we’re all human beings and, under the US Constitution, entitled to the same rights. All are created equal. Our founding fathers didn’t write, “all except black, yellow, or purple people, gays and transsexuals, and Jews and Muslims.” It says all.

Whether you’re law enforcement or John Q. Public, let’s remember that. Treat others with kindness, generosity, and respect. Treat them as you’d want them to treat you. That would be a terrific, and very significant, start.