I met Tom Seaver in 1969. I was just a kid in New York City and he was doing a promotional appearance at a furniture store in Manhattan. My dad had a business in the city and we had just come from a job, so we arrived late. Just about everyone had left except for Tom and someone else. Tom waved us in and there I was, standing at the feet of my favorite Mets player. He was wearing a suit and he was tall. He signed an 8X10 glossy and I have a faint memory of him shaking my hand. Of that, as a kid, such lifelong memories are forged. 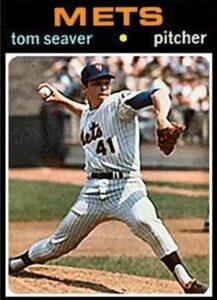 I remain a Mets fan to this day, even though I moved to California three decades ago. I followed Tom’s entry into the wine industry and as many of you know, I’ve had a longtime connection with the Napa Valley. I even wrote two books set there (Crush and Velocity). When I learned Tom had started a winery in Calistoga, I thought more than once of showing up with a signed copy of Crush and the old black-and-white glossy he signed back in 1969—especially given his love of books. But as a public figure myself, I understand the division between professional and private lives. I decided against visiting him.

A few years ago I was in Napa and ran into someone downtown. I don’t know how we got onto the topic, but it turned out that she knew Tom Seaver. Quite well. She was his mother-in-law. We had a long talk about my meeting him as a child and how I watched every game he pitched on TV (and in person when I was fortunate enough to be able to afford a ticket to Shea Stadium. My mother clipped coupons off the Dairylea milk cartons and mailed them in for complementary nose-bleed seats). I told her about my years-ago thought of bringing Tom a signed book and sharing the story. She cast her eyes to the ground, then told me that he was not well, that he was suffering from dementia. I asked her if it was from the Lyme disease he’d contracted in Connecticut and she was surprised that I knew about that. Yes, that was the cause. She asked me not to say anything to anyone as it was closely guarded family information. (I honored that request.) She gave me her daughter’s business card—she owns a hot yoga salon in the area—and suggested I speak with her before contacting him.

I never did. I figured the last thing the family needed was someone showing up and wanting to meet his childhood sports hero. Although one of the greatest pitchers in the long history of the game, Hall of Famer Tom Seaver was an individual who was more than a professional athlete who excelled at his job. He was a Renaissance Man, according to his former teammates. He took a cerebral approach to not just pitching but everything he did: he wanted to be the best in every endeavor. I can relate to that. Not surprisingly, Tom took the same approach to his Diamond Mountain vineyard.

When Citi Field opened in 2009, I was in New York for ThrillerFest. My wife and I ate in what was then the Acela Club restaurant, which overlooked left field. We had a bottle of 2006 GTS Cabernet. It was extraordinary, just like the pitcher who took the mound for the Mets only about two hundred yards from where I was seated. I still have that bottle, much like the memory of meeting Tom when I was just a kid.

He will be missed, but my memories will live on.